Why Albany is The Bahamas Most Exclusive Resort Development

By R.E. Properties Caribbean in The Bahamas with 0 Comments

Angelina Villa-Clarke Contributor Forbes
Standing in a half-built concrete building, with the Bahamian sun blazing down, is a revelation. This is Albany – one of the world’s most exclusive resort communities located on New Providence Island in the Bahamas – and, it’s likely that you may not have heard of it. Owned by British billionaire Joe Lewis and his private investment organisation Tavistock Group, along with golfing greats Tiger Woods and Ernie Els and actor and musician Justin Timberlake, the ambitious development first opened in 2010 and it remains something of an under-the-radar destination for a tranche of starry residents and guests. 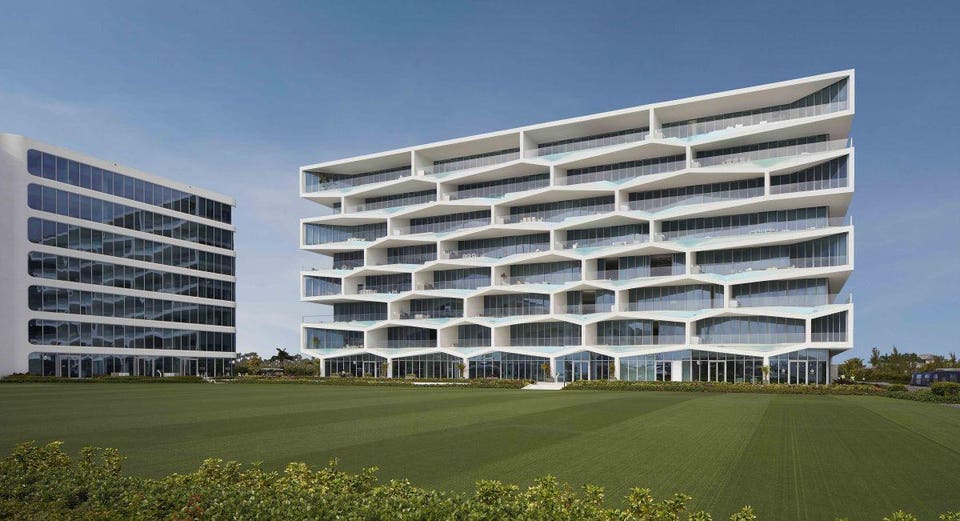 Looking around at the amount of construction going on, it is also apparent that there’s no shortage of demand for its multi-million dollar properties, which are owned by some of the globe’s richest few (think: power figures, A-listers and sports professionals alike), and, through Albany’s Hotel Programme, are open to a jet-setting crowd, eager for a holiday with a difference. 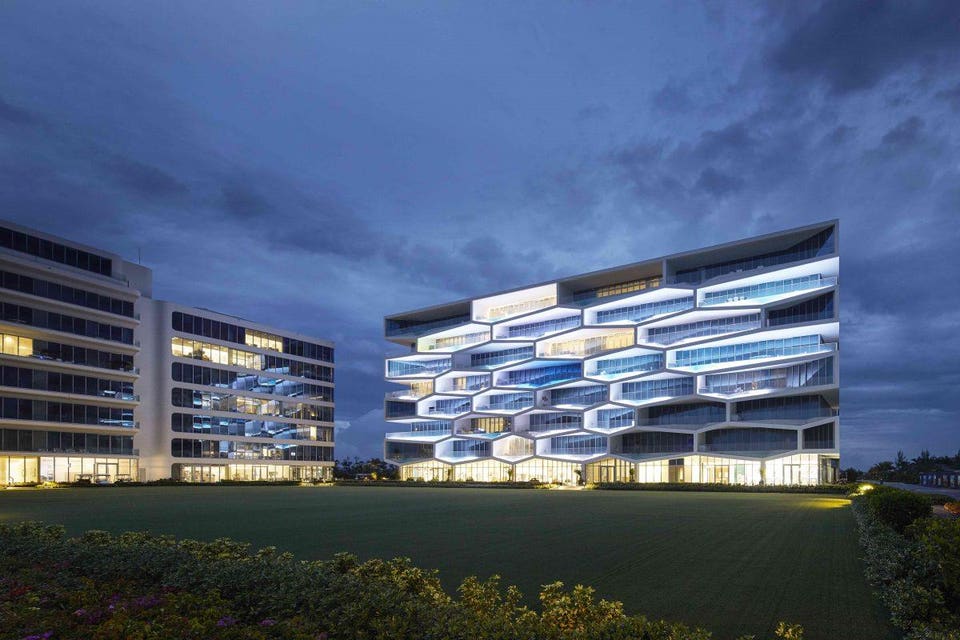 The Honeycomb at night(CREDIT: ALBANY)

The latest build is called Tetris and it’s one of four buildings which will be constructed over the next few years. Due to open in 2020, and conceived by OOAK Architects, a female-led Swedish architecture firm, it will add to the already substantial architectural prowess displayed here. Bjarke Ingels Group (BIG), which counts the Google HQ in California and New York’s 2 World Trade Centre (the latter is currently under construction) under its belt, and Morris Adjmi Architects, which designed Brooklyn’s Wythe Hotel, are just two of the big-hitter names which have already masterminded buildings at Albany. 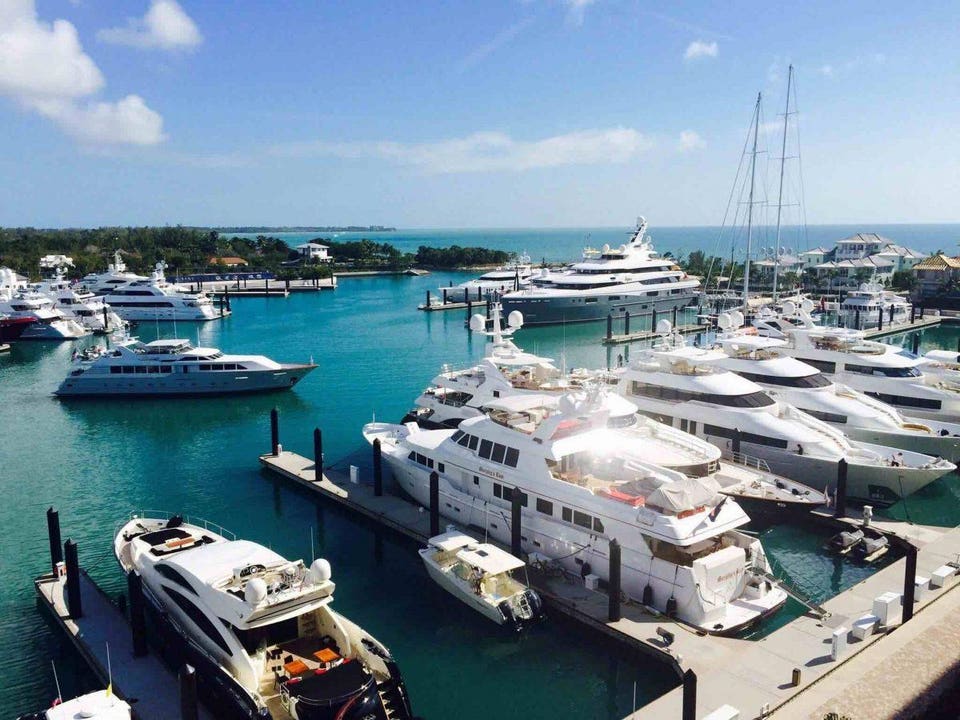 With its modular block design (based on the famous computer game), Tetris will offer 25 sprawling, luxury apartments, starting at a price point of $5-6m and reaching around $20m for the penthouse properties. “I like to think of them as ‘houses in the sky’,” says Marie Kojzar, one of the Swedish architects responsible for the concept of Tetris. “These are set to impress – with panoramic views over the ocean, cantilevered lounges and grand terraces with sunken pools.” 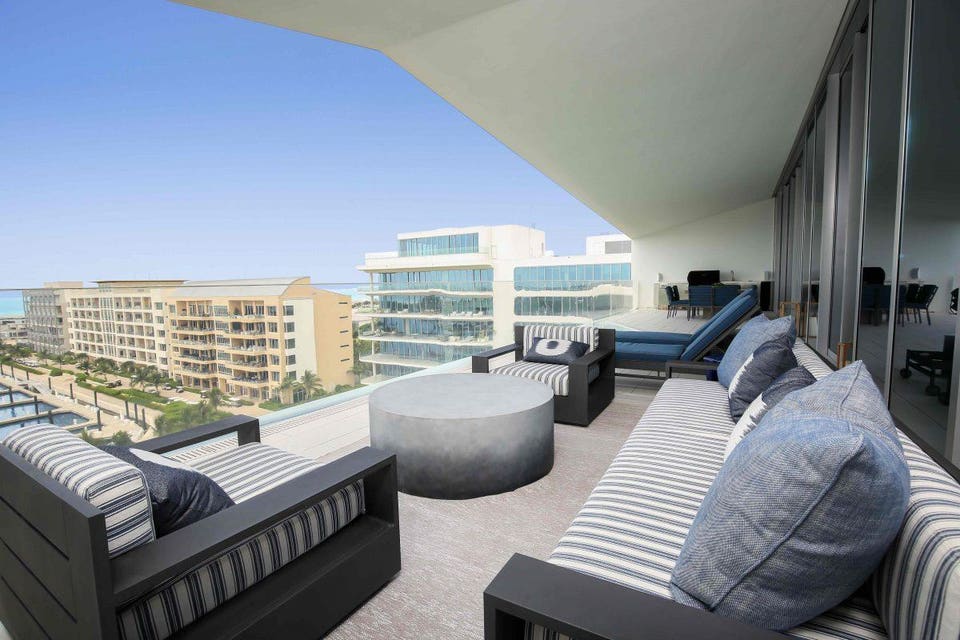 One of the residences in the Honeycomb building(CREDIT: ALBANY)

She steps perilously close to the building’s open side, but her vision is clear: “Best of all, they will be light-filled and spatially ‘intelligent’ to make the most of this exceptional location.” Indicating the vast space around her, she continues: “These homes will appeal to those who already have beautiful properties in desirable locations around the world. Globalisation is a very real thing, and these people want to live the same, no matter where there are in the world – so it is an important consideration in the design of luxury builds such as this.” 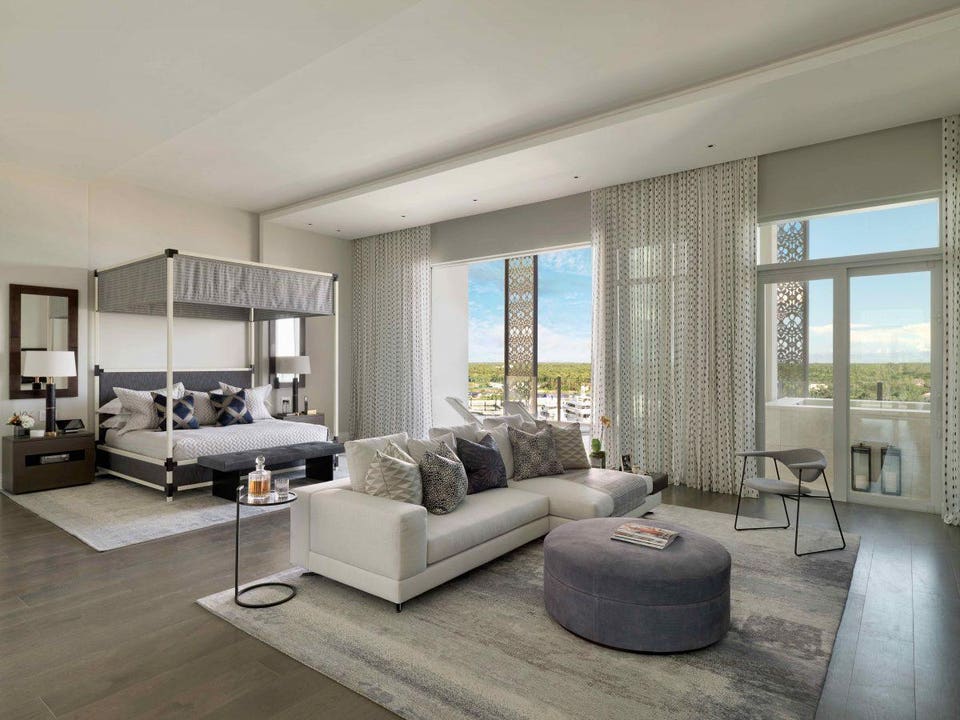 Residences inside the Orchid building are sleep and sophisticated(CREDIT: ALBANY)

Not surprisingly, perhaps, all the Tetris properties have already been sold to buyers wanting a slice of the Albany pie, with interested parties already ‘queuing’ for projects which have yet to break ground.

“Albany is a unique place,” explains Jason Callender, partner at Albany. “It offers the whole package for a new breed of global elite. Interestingly many of our residents are self-made and in their 30s – they want a high level of service and luxury but not necessarily the formality that can come with that. They are after a laid-back, unfussy approach to living. From the mega-yacht marina to the exceptional dining, from the state-of-the-art sports fitness facilities, which beckon some of the world’s best sports pros to train here, to the luxury interiors of the apartments – we’ve made sure every aspect is ‘on point’. We have a high school with unprecedented facilities, a championship golf course, designed by Ernie Els, and even a music recording studio. I know I’m biased, but it speaks for itself.”

While it’s clear that there are myriad advantages of living under a Bahamian sun, for those who are able to, Albany is not just aimed at ex-pats from New York, Toronto or London. With most properties – from ocean-front villas to cutting-edge apartments – available to rent on a nightly basis, the resort is also an under-the-radar hotspot for holidaymakers in the know. 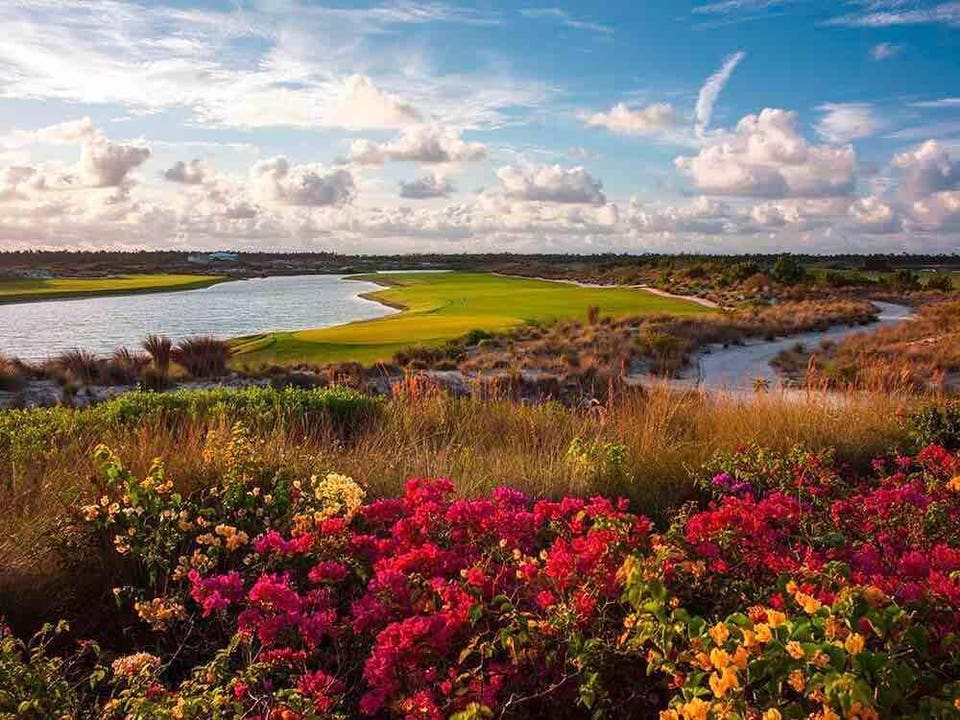 Designed by Bjarke Ingels, and named after its stunning glass geometric façade, The Honeycomb apartments all have their own outdoor pools sunken into the terrace floors, so that they are dramatically transparent and visible from outside. While the exterior is spectacular, the interiors ramp this feel up even further. From an African-influenced apartment – richly textured with baskets as art work, a taupe-oyster-mushroom palette and touches of jet-black – to an ocean-referenced property – with shell-encrusted chandeliers, an azure-and-crisp-white palette and huge canvas seascapes – the spaces are super-slick and straight out of the pages of Architectural Digest. 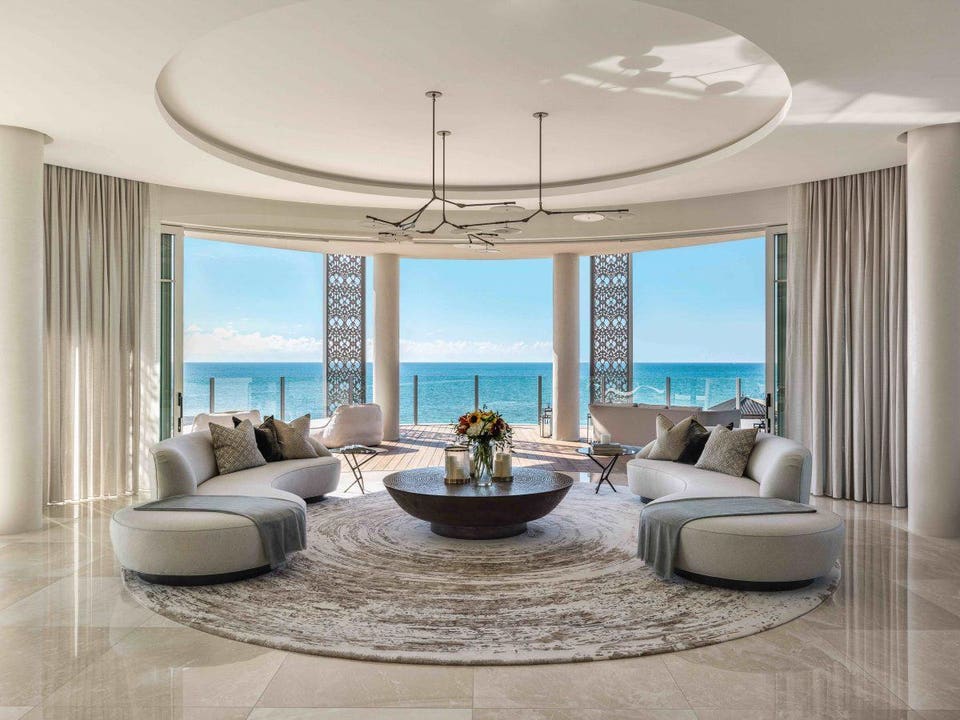 Inside one of the private Marina Residences(CREDIT: ALBANY)

Holidaymakers can also choose to stay in colonial-style, ocean-front homes, where the pristine beach is just steps from your door, or Club Villas, which have a palatial feel with inner courtyards and pavilion-enclosed swimming pools. Marina Residences, such as those in The Orchid, which is sheathed in trellis-style, aluminium panels cut in a floral pattern, are vast and uber-glamourous, with floor-to-ceiling windows and wrap-around terraces. For something spectacular, the top floor penthouse – with a lift that opens directly into it – has a circular living space, marble floors and custom-designed furniture. 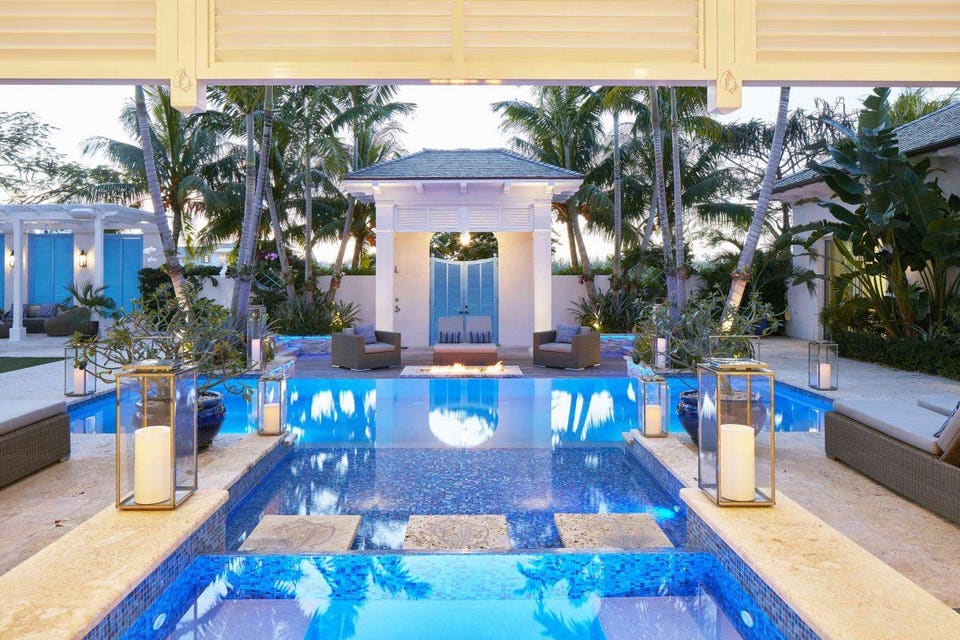 ‘Conch Shack’ – one of the Beachwalk villas(CREDIT: ALBANY)

Each home comes with a golf cart to get around – perfect for pitstops at the Parisienne-style French patisserie Bisous Bisous or the ‘straight-out-of-LA’ Liquid Nutrition, where you can have an energy boost with inventive smoothies, juices and wheatgrass shots. 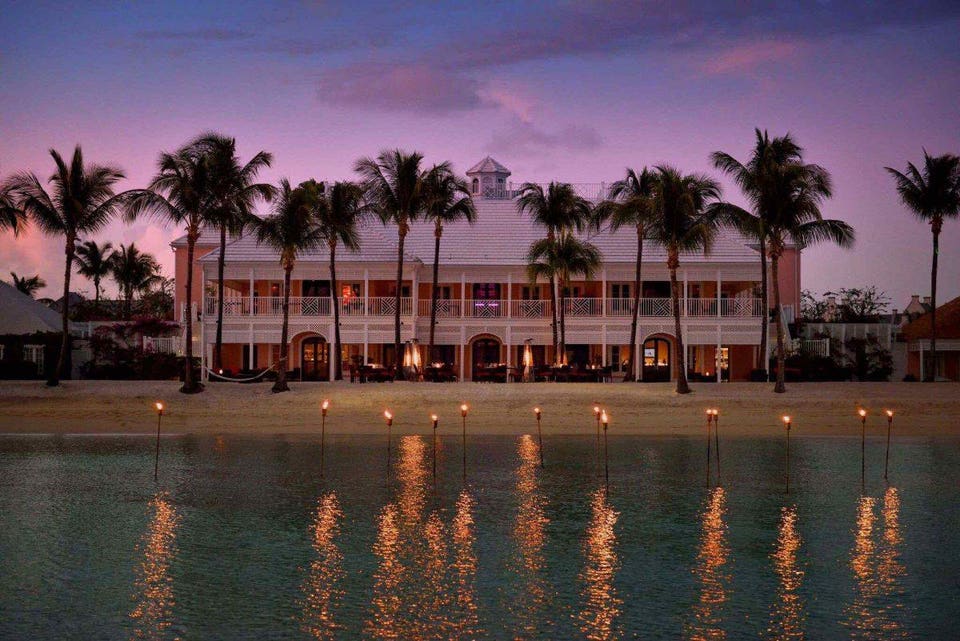 While most of Albany consists of purpose-built contemporary architecture, giving more of a Bahamian flavor is Albany House, the candy-pink, historic manor found at its heart. Famous for having featured in the Bond movie Casino Royale (it’s the backdrop for Daniel Craig’s memorable scene where he emerged from the turquoise waters), it was also once the home of Jean Chalopin, the creator of Inspector Gadget. These days, it is where much of the resort’s dining offering is housed, which is overseen by British chef Oliver Stephens. There’s Aviva, which offers gourmet cuisine with a Caribbean twist (the fish tacos and avocado fries are a must), and Vesper Bar & Lounge, which opens on a Friday, offering cocktails, a DJ spinning tunes, and a sushi menu courtesy of Thai chef Sukhum Temp. Meanwhile, Footprints – with its sunshine-yellow booths and sand floor – is a retro-inspired beachside eaterie offering lobster fritters, tuna poke bowls and super-salads. 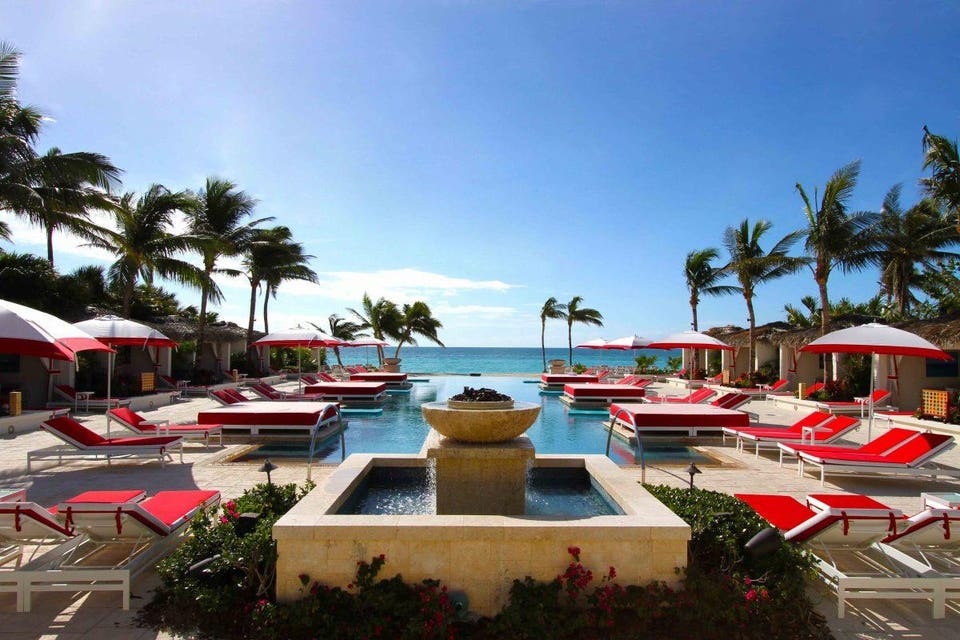 Spread across 600 acres and gated, another bonus to Albany is that it is also exceptionally private and, no doubt, one of the reasons that its guest-list glitters with the rich and famous. But while there is a long list of famous names who live or holiday here, no one is that bothered by seeing a Hollywood actor in a gym or a football pro soaking up the sun by the pool – it’s that kind of place.

As well as the multiple restaurants, two pools and private beaches – there’s also an equestrian centre, a cinema, an art gallery, hair salon and a state-of-the-art boardroom facility, called The Bullpen (named after ‘The Charging Bull’ by Arturo Di Modica whose work of the famous Wall Street Bull sits in both the Financial District in New York City and on the Marina Plaza at Albany overlooking the harbor). 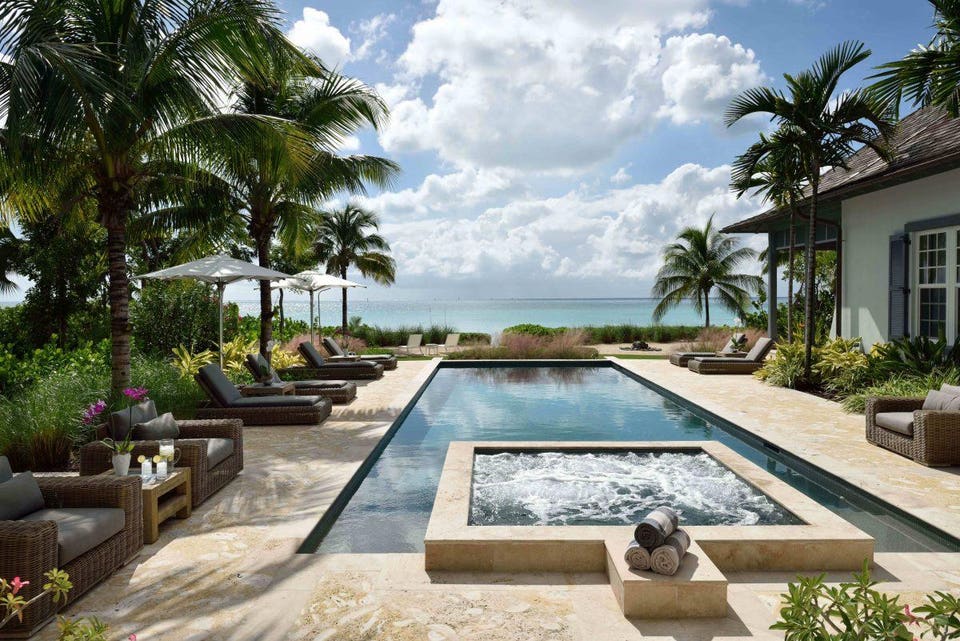 Meanwhile, the resort’s spa is about to have its day in the spotlight, with final touches being prepared for its relaunch as a world-class wellness centre. Offering holistic retreats, access to the world’s best aesthetic experts and standout facilities, such as the only cryotherapy centre in the Caribbean, and an integrated approach to wellness – this promises to be a one-stop shop for all things health related. It doesn’t get more ‘starry’ than that.